FROM THE SOUTH WEST.   JEAN HISCOX.

Had a call from Denise Hensley to let me know her bitch had been left out of the results of Heads of the valley Ch. Show. 2nd VD/B Hensley’s Voneche Sashka of Zuberg. The results I did not have from GSDC of Kent Ch. Show in time to send in to Mag. last month were 2nd MPB Cooper’s Usharrgo Malan. 7th JB Aldridge’s Edser Alacrity. 6th PGB Aldridge’s Edser Elesian.

Pepsi v Grauen has been passed Kkl 1 and V rated at a Landesgruppen Show. Peter and Wayne went across to Karlsruhe to watch her being Kkl’d and to bring her home. On the way back they called into a Landesgruppen Show at Merzig ( LG11 Saarland ). There were several Brits at the show doing well with homebred stock in the young classes ( Full results on our website ) Conbhairean Linzi gained VV5, Mondschatten Duma VV11. Shotaan Fabius VV1. Kris vom Conbhairaen VV6. Godalis Quenna SG6 and Astana Alfons SG4.  Well done to those breeders you make us proud! 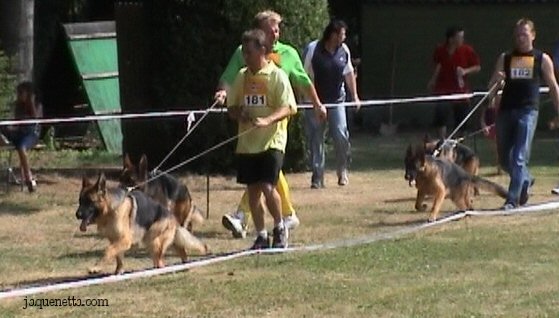 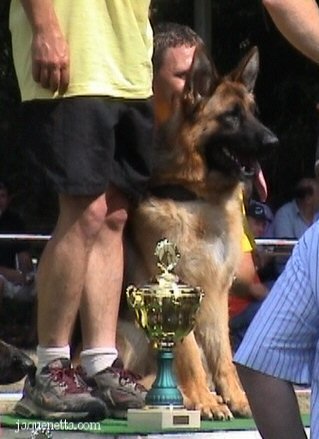 I heard this on Planet Rock digital radio from Rick Wakeman who says he was told it was true! A man was on an aeroplane, a man with a German Shepherd Dog sat down next to him. The man said ‘ I didn’t know they allowed dogs in this section of the plane. The man with the dog replied, ‘I’m an undercover policeman and this is a very special dog. He is a sniffer dog.’ When the plane was airborne the dog began working. He made his way along the aisle. He stopped by a woman, raised a front paw, returned to the policeman and barked once. ‘What does that mean?’ asked the man. ‘He’s found the woman is carrying cannabis. I send a description of her through to customs and they stop and search her,’ explained the policeman. The dog stopped by a man, raised his front paw, returned to the policeman and barked twice. ‘What does that mean?’ said the man. ‘He’s found that man is carrying cocaine,’ answered the policemen. This went on for a while with the policeman interpreting the barks. Suddenly the dog raised both front paws, came racing down the aisle, jumped up and crapped in the policeman’s lap. ‘What does that mean,’ said the man. ‘He’s found a bomb!’

Sheila’s comments about judges that are starting out at the bottom of the ladder. Many of us are prepared to travel to judge a general open show with only four to six mainly mixed classes, it can be a little disheartening when very few dogs are presented. (Apparently the KC used to count the number of dogs entered under the judge at a show, but now they count the number of dogs actually exhibited and judged.)  I heard of someone from the North who wants to be a judge asking a person in the South West if they could get them a judging appointment, which I believe they have. Hopefully they will get a good number of dogs to judge after coming all that way. It is worth accepting judging invitations from the general open shows with mixed classes and all types of G.S.D. as they give a very good grounding if you ever get invited to judge a single breed show. I take heart from the comment by Frank Jones in Dog World. ‘It is often said any fool can judge good ones, the challenge is to judge a class of unrepresentative exhibits which might test the most mature and experienced of judges.’

I’ll see you at the Sieger Show, or maybe not, it’s according how much I’ve had to drink.